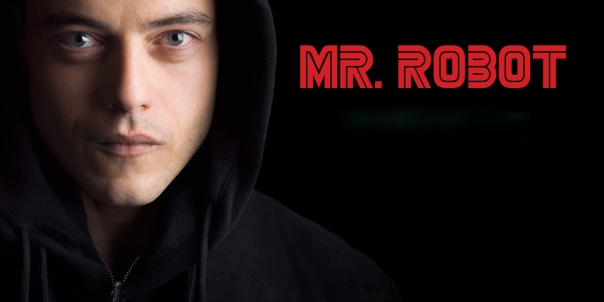 After the first terrific episode, Mr. Robot left us in the middle of a cliffhanger. We find Elliot facing the so-called “1% of the 1%” he had briefly mentioned on the introduction to the story. Among the executives gathered at the top of a non-descript office building we find a familiar face, a former hacker, and one of the heads of E Corp we had briefly been introduced to in the first chapter. Interestingly, the scene is not one that offers much of a climax, and I get the feeling it is more of a moment of impasse between two players that will unavoidably meet again.

END_OF_DOCUMENT_TOKEN_TO_BE_REPLACED

Browsing the web a few days ago I came across a couple of television reviews that compared the quality of the new USA network serial show Mr. Robot to Vince Gilligan’s already iconic Breaking Bad.
Upon embarking on a deeper web search, I found that Mr. Robot has a very impressive 9.1/10 on IMDB (compared to Breaking Bad’s 9.5/10), a 98% critical and 95% audience score in Rotten Tomatoes (against a 95% and 98% for Gilligan’s show) and a 75 in Metacritic for season one (compared to Breaking Bad’s 73 for its premiere season).

END_OF_DOCUMENT_TOKEN_TO_BE_REPLACED

I continue what I started last week with a look at all of the television I watched in the past year. Obviously, I will not be talking about the occasional one or two episodes I saw from series I haven’t really followed. My reviews will be on full seasons of anything I managed to watch, whether new or old in the 12 months of 2014.

I also thought it would be good timing to share my thoughts on television right after the Golden Globes telecast which saw excellent newbies get the recognition they definitely deserved.