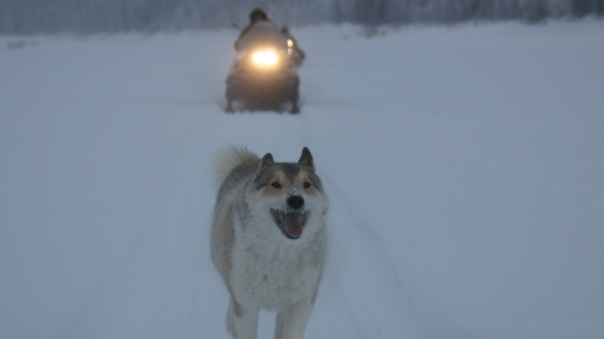 Happy People: A Year in the Taiga is yet another triumph in the career of Werner Herzog, the world’s preeminent documentarian. Like one of his previous films (and my favorite of his) Encounters at the End of the World, Happy People invites those with a bit of curiosity to meditate about what is truly important of our time on this planet and reflect upon the happy simplicity of lives spent in far away lands most of us will never see.

The film was shot over the course of a year in the remote and endless wild of the Taiga in the middle of Siberia in Eastern Russia. If not for a few modern tools and hints of electricity, the people that inhabit these lands could easily be mistaken with the first civilized men from the stone age: living off the land, crafting their own tools, and leading a life that relies on community, cooperation, hard work and a profound respect towards nature.

Werner begins to tell his tale at the end of winter, showing in great detail how life in these parts of the world is very much determined by the seasons, or rather by the cyclical nature of life that tells us that Spring is surely followed by Summer, and that Summer is followed by Fall. More than any other group in a village of about 300 people, the hunters of the Taiga (also known as trappers) follow nature’s orders and go about their work with precision, dedication, and diligently, prepping their tools and gear months prior to the height of the hunting season in the winter. Like the hunters it focuses on, the documentary is perhaps too interested in the craftsmanship and the minutia of their labor, lacking the kind of pace and broad appeal that would have made the film a bit more accessible. However, for those with a genuine curiosity for lives as far removed from modernity as can be, even the most mundane of the activities these villagers engage in takes a poetic universal resonance that is hard to put into words.

As winter approaches, the film delivers on its promise, following these incredible men into a yearly journey that sees them live in complete isolation for months, surrounded by forests, inside huts of their own making and with only the company of Siberian huskies and a few wild animals.

Herzog, in his inimitable narrative style, offers just enough information and child-like curiosity to ignite our own. His eagerness to learn and appreciate what he sees only matched by the beauty of the images he and partner Dmitry Vasyukov collect. More importantly, they give the Taiga a face, letting these people tell their tales, share their craft and their wisdom with charming modesty.

Similarly to Encounters at the End of the World, Herzog capitalizes on the exotic lifestyle of the people of the Taiga to make a documentary that is beautiful, meaningful and fascinating. The lives of the locals remind us of our ancestry and how people that are away from the pressures of modern society, are still able to lead rewarding and happy lives doing what they love while living off the land without luxuries.

If there is a criticism to be made is how Happy People consciously tries to frame the lifestyle of these hunters as not only a beautiful alternative to modernity, but as a more dignified and worthwhile kind of life to be had. Though the argument is strong and compelling (especially when it suggests we are animals that should work with our hands), one can’t help but wonder if humanity, by its very nature, is impossibly unsatisfied and, for the most part, cannot be bounded to the kind of primitive existence these men are so proud and happy to lead.

2 thoughts on “Film review: Happy People: A Year in the Taiga”