The master of suspense made 54 feature films during his very long and celebrated career. Having only seen a couple of his films before I started this challenge, it is time for the author of this blog to become a lot more familiar with Mr. Hitchcock. The minimum goal will be to watch and review at least 24 of his films in 2013, though I will try to aim for 30. I will start with the must-watch classics, slowly making my way to the lesser known part of his work.

If North by Northwest was a very auspicious start to my Alfred Hitchcock marathon, Strangers on a Train is the clearest sign I could have gotten as to how worthwhile this journey might end up being.

Like North by Northwest and many other films directed by Hitchcock, Strangers on a Train revolves around the idea of being wrongfully accused of a crime, a subject matter that stems from an unusual phobia that tormented the master of cinema for most of his life.

Though there is still a bit of silliness and lightheartedness in the script, Strangers on a Train is a far more serious affair than North by Northwest. The genesis of the story comes from the very first scene in which two men casually meet on a train heading to New York. Guy Haines, played by Farley Granger, is a reserved and elegant local tennis star who is in the midst of a nasty divorce; while Bruno Antony, played by Robert Walker, is the bitter son of a New York magnate.

Despite the well documented hesitation Hitchcock felt when he cast these two actors for the lead roles, the effectiveness of the film contradicts the director’s initial reservations. Mr. Granger may not have been the most capable actor around, but he brought a sense of vulnerability and naivete that was essential to the role. Even better was Robert Walker in what was to be the last performance in his short-lived career and the one he is most remembered for. His Bruno Antony is the highlight of Strangers on a Train, creating one of the most iconic and creepy representations of evil in the history of cinema. Walker not only takes control of every scene he is a part of, but he makes us miss his character whenever he’s not around.

As it is to be expected, Hitchcock also delivers a very smart story filled with memorable sequences, most of which revolve around Bruno. There is, for instance, the first sequence at an amusement park where Hitchcock toys with his audience until he finally delivers the expected outcome. Through it all, Robert Walker becomes a hunter assessing the vulnerability of his prey. He patiently chases his victim as if he was a man struck by a case of love at first sight except that his eyes seem devoid of sexual desire. From the way he walks to the way he looks at the woman he wants to kill, Walker embodies this troubled man as if it was an extension of his persona.

In the reviews and analysis I have come across of Strangers on a Train, there seems to be as much interest in what is not said or presented to us than in the film itself. We never, for example, get to really know the cause behind Bruno’s pure hatred towards his father. Is he just a natural-born killer who uses his dad as the perfect excuse to commit murder? Or are his motivations strictly tied to the hatred he feels towards his father? And, if so, what triggered the desire to actually carry out his murderous plan?
There is also the almost obsessive manner in which Bruno seeks for Guy Haines during the whole film. Walker makes us believe there might be more under the surface than a simple chance meeting on a train. In fact, the way in which Hitchcock sets up the first sequence, there is good reason to believe the meeting wasn’t by chance at all and it was all part of Bruno’s clever plan. Upon meeting Haines, Bruno seems awe-struck, as if he had finally managed to find someone he shared something very peculiar with. Some critics even suggest that Hitchcock might have hinted at Bruno’s homoerotic tendencies. I, for one, attribute his behavior to a sense of longing. Bruno seems to me like a lonely man who has never truly grown independent from his rich parents and craves for a true friend.

Aside from the very last sequence on top of a merry-go-round which seems a bit rushed, Strangers on a Train flows seamlessly from one development to the next. Upon watching it a second time, I began to appreciate an entirely different level of detail that defines each and every sequence. Many of these are simple visual touches introduced by Hitchcock that may go unnoticed after only one viewing, but that imperceptibly add to the quality of the film. 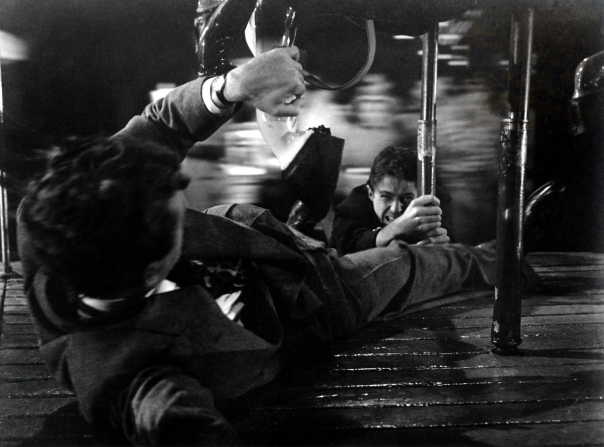 8 thoughts on “The Alfred Hitchcock Marathon (part two): Strangers on a Train (1951)”