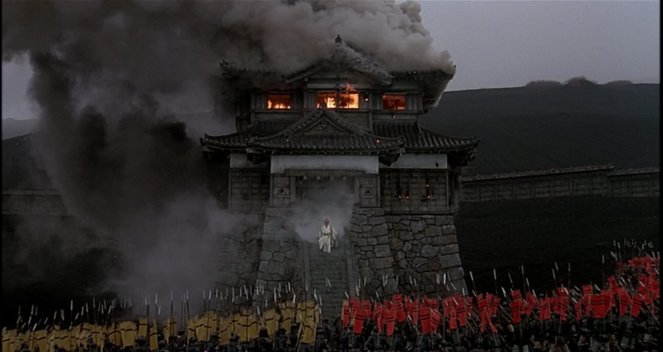 In Akira Kurosawa’s impressive oeuvre, Ran is often described as his most epic and ambitious contribution to the art of film making. Inspired by the Shakespearean tale of King Lear, Ran is delivered with the discipline of a perfectionist, with the visual richness of a master craftsman and the obsessive attention to detail of a director who had conceived the idea about twenty years prior to the release of the film.

After a long and fertile film-making period that spanned from 1944 to 1955, which included gems like Ikiru (the ending of which was part of my best moments in film history special found here) and Seven Samurai, Kurosawa’s style had fallen out of fashion in Japan by the late 1960s. Once the pride of an entire nation, his films were considered conservative relics not to be reproduced. Beyond stylistic concerns, studio heads in Japan were particularly wary of Ran given its ambitious scope and how much it could potentially cost.

In the years prior to the making of the film, commissions for Kurosawa were scarce, the only significant contribution to his body of work was Kagemusha, brought to life with the help of admirers George Lucas and Francis Ford Coppola, who helped raise funds for the project. For more than twenty years Kurosawa had barely made any films, a sad professional turn that extended to his personal life as he struggled with depression and reportedly attempted to kill himself.

It would not be until 1984, when Kurosawa was well into his seventies, that he was able to make the film he had been wanting to make. By then, most of us would have gladly welcomed retirement but, for Kurosawa, there were still films to make and epic stories to bring to life.

It is not a leap of faith to suggest that the story of Ran was, at an emotional level, parallel to the life of the auteur. After all, this is a Shakespearean tale about Hidetora Ichimonji, an old Japanese warlord driven to madness by tragedy but, most of all, by failure. Curiously, the adaptation of King Lear to Japanese customs and traditions, also shifted the focus of the original story. Kurosawa presents a film that is far more interested in the old man’s delirium in the midst of a war between his 3 sons, than in the back and forth of the bloody battles between power-hungry siblings.

In its exploration of the mental and emotional deterioration of Hidetora, one can almost feel the director’s personal struggles pouring into his character. Like Hidetora, Kurosawa led a troubled existence in his late years. His suicide attempt had happened just a few years earlier and it could be assumed that part of his anguish translated to his work.

The study of Hidetora parallels King Lear in terms of content, but not as much in terms of style. Kurosawa’s take on the classic play had a distinct Japanese flavor. The king is not so much a king but a powerful warlord in control of a vast land. The Japan of Ran had yet to find a national identity. Though there were charismatic leaders dotting the land, there was also an incessant power struggle among regional forces that is in full display once the foolish Hidetora cedes his hard-earned control.

For a film released in the mid 1980s, Ran had a considerable production value. As predicted by many hesitant studio heads, Kurosawa would require a hefty financial backing to craft the film. The sets he helped design were grandiose fortresses made of wood and stone set against a barren Japanese landscape of tall grass, mud and dust. While the colors in the background were earthy and opaque, Kurosawa decided his characters would stand out with colorful and vivid garments that were beautifully realized. From a visual standpoint, the duality was effective, making death and war feel even more final in such an inhospitable land.

The acting, as it is common in Kurosawa’s oeuvre, was classically delivered, punctuated by moments of poignant realism that were diluted by decidedly theatrical performances. War was presented in a similar fashion, coming off as a conscious theatrical orchestration that was meant to be grand, bloody and emotional, a sort of hell on Earth that wasn’t entirely anchored in reality. As a result, Kurosawa’s Ran suffers from a crisis of identity at times, mixing realism and dramatism in a messy and unoriginal way.

For the time in which it was released, Ran appears to be a bit dated, resorting to the kind of overacting that suits the stage, but not the big screen. It is hard to relate to the suffering of Hidetora and of the rest. Even then, credit must be given to the artistry of Kurosawa’s work and for trying to adapt Shakespeare to film, which is always a very hard task.

– A review of the excellent Life of Pi

– Thoughts on the birth of the supertall skyscraper

– A review of the very entertaining film Looper